We, the undersigned citizens of Ottawa, IL, object to the City Council’s rushed discussions to approve the annexation and rezoning of 3 ADM/ARTCO parcels located at 1481 and 1495 off East Route 71 without first imposing strict regulations to better protect Ottawa citizens from the dangers this new sand shipping facility.

In addition to the conditional use restrictions proposed by the City Planning Commission for the “R” rural zoning, we request that ADM/ARTCO install and maintain an air monitoring program throughout Ottawa. Violations of the standard for .03 mg/m3 measured as PM4 will result in limited loading and receiving hours for the ADM facility. Monitors shall be installed at neighboring residences located within 2 miles of the parcels, as well as at schools and other facilities for sensitive populations within 1,000 ft of silica trucking routes through the city on Routes 71, 23, and 6.

Things have been quite busy over here in Sierra-land. Please join us April 1, 7pm, in the Council City Chambers in the City of Ottawa (301 W Madison St, Ottawa, IL).

The Ottawa Planning Commission will be meeting to decide whether to add “silica sand shipping” into the “R” Rural conditional use permit language. This is significant and related to the Starved Rock mine, since it will ultimately determine where Mississippi Sand will truck their sand to be shipped out of the area.

I would urge all who are able to attend, this is our chance to get concerns related to increased dust and traffic on the record.

Just a quick update on what has been going on in the past few months:

January 7, 2013: The Ottawa Planning Commission holds a special meeting where they recommend (to the City Council) to add a new conditional use for shipping sand under “R” Rural Zoning.

January 15: The City Council votes to adopt the change in the zoning ordinance recommended by the Planning Commission.

January 28: The Planning Commission met with an Archer Daniels Midland (ADM) representative. ADM hopes to use their facility off Route 71 as the sand shipping terminal for the Mississippi Sand Mine, and was seeking 1) Annexation (into Ottawa) and zoning of three parcels east of the city to the new “R” rural, and 2) A conditional use to use the parcels for barge fleeting and shipping sand.  The Planning Commission tabled the requests after the lawyer for one adjacent landowner testified that proper notice had not been given for the hearing to proceed.

March 4: The Planning Commission again meets with ADM representatives. After several hours of public comments, the PC tables their annexation vote for April 1. Earlier that same day, a lawsuit against the City was filed, citing a violation of the Open Meetings Act for the January 7 and 15th actions the Planning Commission took.

March 15: Advertisements in the paper show there is a new meeting April 1, 2013 at 7 pm in which the Planning Commission will meet in special session for the purpose of conducting a public hearing on a proposed amendment to Section 10B of the City of Ottawa Zoning Ordinance (“R” Rural Conditional Use”). The proposed amendment would add as a conditional the following:

“Barge Fleeting operations for trans-loading and hauling of grain, sand, including silica sand, gravel or other non-hazardous granular products, and using equipment buildings and/or silos for storage and shipping of such for market, but not including manufacturing”

In essence, it is the same discussion that was held on January 7. It is likely the City felt they had violated the Open Meetings Act, and so to avoid further legal action they have advised ADM to withdraw their request for now. From a legal vantage point, everything in terms of the rules and regulations has returned to pre-January 7 decisions, hence the need to repeat the Jan 7 discussion.

April 1: The Planning Commission will hold their meeting/public hearing to discuss this advertised issue, April 1, 7pm, in the Council City Chambers in the City of Ottawa (301 W Madison St, Ottawa, IL).

I would again encourage all who can to attend. If silica sand shipping is not added to “R” rural special use, then ADM will not be able to move forward with their request to ship the Mississippi Sand mine’s sand at this location.

We heard today that the IEPA has approved the National Pollutant Discharge Elimination System (NPDES) permit for the Mississippi Sand mine. Please see the text of our joint statement below:

On January 29, the Illinois Environmental Protection Agency (IEPA) issued NPDES Permit No. ILG840203 granting Mississippi Sand, LLC permission to discharge wastewater from its planned mining operation adjacent to Starved Rock State Park.  The permit will allow Mississippi Sand to discharge up to 5.1 million gallons per day of stormwater and pumpage from the mine pit into a tributary of Horseshoe Creek.  Horseshoe Creek flows from the mine site into Starved Rock State Park. We are deeply disappointed by IEPA’s decision. In particular, IEPA’s granting the permit without holding a public hearing to listen and to respond directly to numerous public concerns about the mining operation’s environmental and economic impacts is simply inadequate. By any standard, Starved Rock State Park is emblematic of Illinois tourism and is one of premiere state parks in Illinois. This decision enables the degradation of the irreplaceable natural and recreational value of the park.

Over the past few months we have worked tirelessly to help organize the substantial opposition to this mine. We have promoted every opportunity to get your voice heard.

On Wednesday, December 12, Sierra Club, Prairie Rivers Network (PRN), and Openlands filed a suit demanding judicial review of the Starved Rock Mining Permit recently approved to Mississippi Sand, LLC by IDNR’s Office of Mines and Minerals. You can find the joint press release for our complaint located on the Media Page of this site.

If you haven’t already, write Governor Quinn today! Tell him you oppose this mine!

IDNR has approved Phase I of the Starved Rock Mine: an 80 acre plot of land that will discharge waste into Horseshoe Creek, a tributary that flows into the park before entering the Illinois River.

A copy of our press release is located on our media page.

Still pending is IEPA’s NPDES permit; for which the comment period closed this past Sunday, November 18. Over 4500 of you wrote in to express your concerns; we need your voices to continue on!

This fight is far from over.  Click here to write Governor Quinn today!   Your voices can still Save Starved Rock!

For helpful maps and background into the controversy, visit our other pages on this site.

Please help in our efforts to stop this mine! The IEPA is currently considering a general NPDES permit for the Starved Rock Mine. Tell the IEPA you want them to issue an individual permit, which will be tailored to site specific conditions.  An individual permit also grants concerned citizens the right to request a Public Hearing prior to its approval.

Visit our Take Action Page to email Barb Lieberoff of the IEPA’s NPDES division, tell her you object to this general permit!

TAKE ACTION HERE!
EDIT: Draft letters to IEPA and the Govenor are now available in download format on our “Share your Concerns” tab here.

I wholeheartedly thank you all for joining us on Sunday. It’s been a few hectic days of processing, but over 120 of you took the opportunity to speak up for Starved Rock! We have in the mail over 80 letters to the Governor, and we encourage you to write more! Remember, every little bit helps!
As we mentioned at our Rally on Sunday afternoon, it is NOT too late to save this park! Here are some things you can do:

1) Write Governor Pat Quinn your concerns. We have an electronic draft here, and while every letter helps, please remember a hand-written note is so much more powerful. Send your concerns to:

Gov. Pat Quinn
James R. Thompson Center
100 West Randolph
Suite 16-100
Chicago, IL 60601
2) Write Barb Lieberoff (Barb.Lieberoff@illinois.gov) your concerns of the pending National Pollutant Discharge Elimination System (NPDES) permit. Tell her how important Starved Rock is, and how you don’t want this mine. Right now IEPA is considering a general NPDES permit, when an individual one is clearly needed – if Starved Rock doesn’t count as a special condition, what does?! 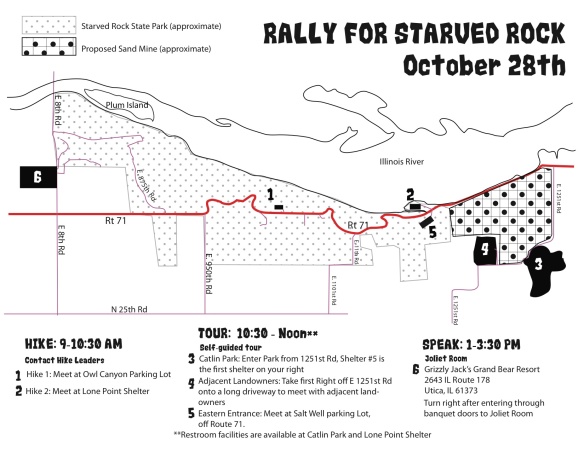 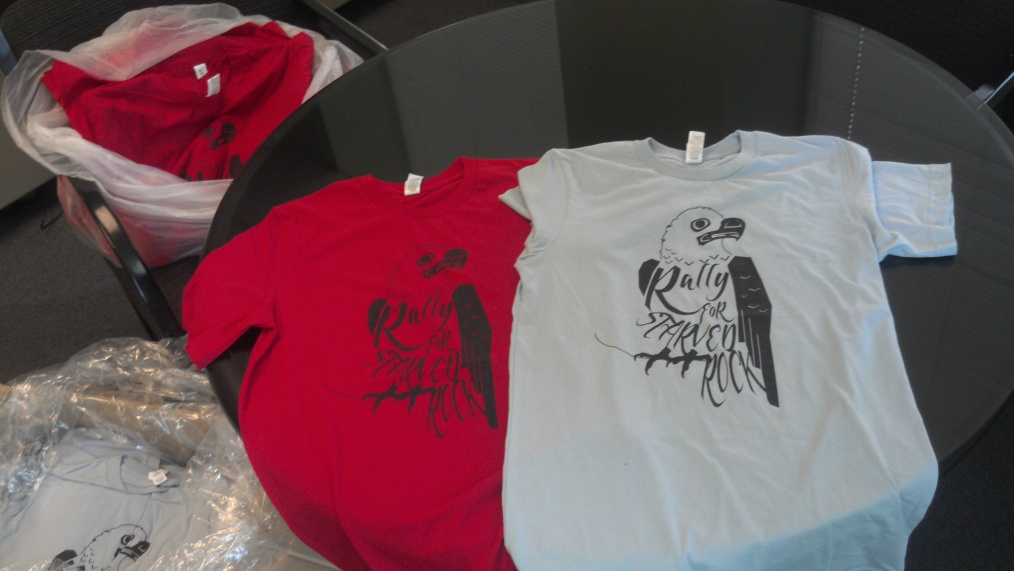 Despite our efforts, the Starved Rock Mine is slowly inching forward through the permitting process. Since we have had limited opportunities for public input and comment, we decided to host our own PUBLIC MEETING to give YOU a platform to speak out against the mine.

Join the Illinois Sierra Club this October 28th to get your voice heard! Hike the trails, tour the mine perimeter, and tell your stories. United, we can tell Gov Quinn we oppose this mine!